These days it seems that everyone is searching for the perfect solution to boosting brain power. Computer-based games, apps and brain-boosting foods cater to maximizing your brain capabilities. Your brain cells are the most energy consuming cells in your body- sucking up 20% of total energy consumption even though your brain is only 2% of your total body weight. The brain generates “power” through tiny organelles, called mitochondria, that are present in every cell in your body. Known as the cell’s “power house”, mitochondria act like batteries taking food and oxygen and converting them into energy (a tiny molecule called ATP known as the energy currency of life).

Environmental toxins can impact mitochondrial function and lead to brain disorders. In fact, one of the first hints of a role of mitochondria in brain disorders was discovered when people exposed to toxins that inhibit mitochondrial function developed brain disease symptoms. For instance, children in China who ate moldy sugar cane got symptoms similar to Huntington’s disease; opioid abusers in the 1980s who were exposed to a byproduct of dirty street drugs (MPTP); and chronic exposure to the pesticide rotenone leads to Parkinsonism.

Poor or abnormal functioning of mitochondria has since been linked to epilepsy, Parkinson’s disease, Alzheimer’s disease, Huntington’s disease, amyotrophic lateral sclerosis, schizophrenia and bipolar disorder. Often post-mortem examination of diseased human brains finds changes in mitochondrial structure and number. As your brain depends on mitochondria for energy as well as monitoring and optimizing brain cell environment, compromising mitochondria can eventually cause cells to not work properly and die.

Despite the importance of mitochondrial function in brain health, there has been relatively limited focus on the role of mitochondria in brain disease as a target for drug development. One challenge for drug discovery is developing a set of data in the laboratory that can translate to the clinic and predict whether a novel treatment will be effective. For mitochondria, much of the research has been based around biochemical and molecular studies, which are perhaps less indicative of how overall brain function might be affected. At Neurexpert we provide translational measures based around the recording of electrical signaling in the brain, which Mark Cunningham (Professor in Neuronal Dynamics, and Neurexpert Consultant: Neural Networks and Oscillations - for more information on the Neurexpert-Newcastle collaboration click here) says “is a highly relevant neurophysiological parameter that provides a valuable source of information to aid translation from pre-clinical research to clinical drug development”. It may be that studying the electrical signaling in nervous tissue can provide a route to studying and understanding the impact of mitochondrial dysfunction on patient health.


Rhythm as a resource for early detection of brain dysfunction

When many cells in your brain talk- either within a brain region or between brain regions- their combined activities create distinctive rhythms or oscillations in the brain network. These neural oscillations represent brain activity - and they can be detected and measured by electrodes on your scalp, or, by electrodes in the brain in the case of patients being treated for epilepsy or Parkinson’s disease, for example. This is the basis for the so-called “EEG” or electro-encephalogram. These oscillations can also be studied in a laboratory setting and lend themselves to drug testing. Neurexpert now offers this facility in rodent and human tissue as a service to the drug discovery community. There are several types of neural oscillations of differing frequencies, and neuroscientists believe that each frequency has a special role. For more information on the EEG and study of neuronal oscillations, please view our YouTube channel: https://www.youtube.com/watch?v=ZRgX1dH1pf8.

Studies found that patients with the brain disorders linked to mitochondrial dysfunction, like Parkinson’s disease, often present with alterations to these brain oscillations. As a lot of energy is required to maintain large networks of brain cells to function at the same time then abnormal mitochondrial function might result in abnormal brain oscillations. Over time, sustained mitochondrial dysfunction in patients could result in cell death and more obvious disease symptoms e.g. movement problems in Parkinson’s and Huntington’s diseases. 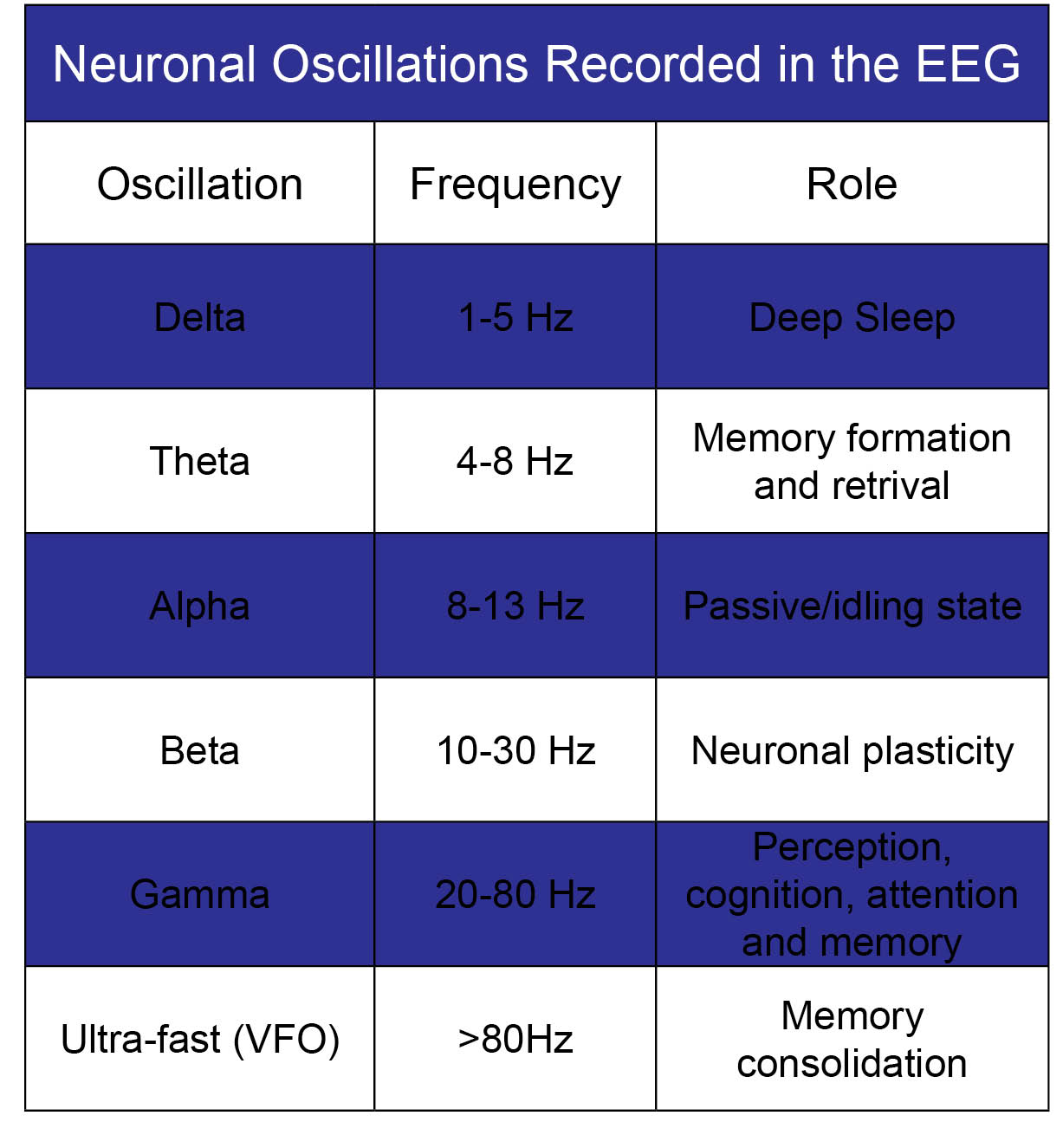 A fundamental problem with many of these brain disorders is that by the time a patient is diagnosed it is almost already too late as much of the brain damage has already occurred. Initial disease symptoms tend to be subtle cognitive changes or might be wrongly diagnosed as depression or insomnia. To some degree, different oscillation frequencies are affected in different diseases- providing a kind of neural diagnostic tool. Not only that, but, by exploiting these observed changes in oscillatory function an innovative platform for testing promising new drug candidates for novel approaches, such as mitochondrial dysfunction, in disorders like Parkinson’s disease, Huntington’s disease or Alzheimer’s disease, could be achieved.

Because it is imperative that we develop new and effective medications to treat these disorders, preferably earlier in disease progression than is happening currently, it is important to set up a clear avenue from preclinical trials to effectiveness in the clinical setting. Optimal translation of science from lab to clinic will need robust data relating to target engagement. Measuring brain oscillations provides a strategy for carrying out such translational drug development. Implementing effective strategies for studying the neuronal network dysfunction in brain disorders, like Parkinson’s or Alzheimer’s disease, could help engineer and evaluate promising new drugs for treatment of disorders and help to target subtle cognitive and psychiatric symptoms early in disease progression.

To view the original paper discussed in this blog “Neuronal oscillations: A physiological correlate for targeting mitochondrial dysfunction in neurodegenerative diseases?" click here.

The Blog was written by Carolyn Lacey, Scientific Outreach Manager at Neurexpert. To learn more about Carolyn and Neurexpert, please click here.

The power of touch and neurodevelopmental disorders

Touch is incredibly important for normal brain development- babies who are not touched have poor outcomes. But, what if a baby gets enough love but their skin nerve cells don’t process touch appropriately? Over 75% of patients with autism spectrum disorder suffer from a change in the way they perceive touch. We look at a Cell study that made a major breakthrough in understanding the connection between the skin and social and anxiety symptoms of neurodevelopment disorders.

Unsure if you are depressed? Could your gut makeup tell your doctor and help customize treatment?

One in a hundred people over 60 are diagnosed with a neurodegenerative movement disorder called Parkinson's disease. We look at how a genetic mutation gives clues on how to develop drugs to slow progression, or halt, the disease.

Can we harness the power of addiction and motivation to cure chronic pain?

Did you know that chronic pain, lack of motivation and addiction have overlapping brain re-organization? We discuss this and how Parkinson's disease medications may be a future chronic pain reliever.